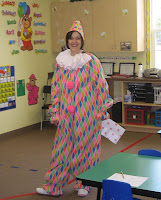 Did you know that Clowns are mean to Elephants? At least that is what Max told us when he was frightened and clinging to my leg the last day of preschool. He was just sure that if clowns were mean to elephants the clown would be mean to him. Tim talked him into staying for the circus shortly after his teacher took off the dreaded hot clown costume and they had a really great day. I am amazed at how much information children pick up from their parents, other children and the especially the television. It really does have a profound effect on their little minds and shapes their thinking. Max's favorite movie has been dumbo and in that movie Clowns are mean to elephants. . . .:) I have made a mental note to be more aware of my actions and words personally. . . .Create a more structured play environment and monitor the playtime they have with their friends. . . .And to carefully observe the programs they watch on television. Who would have guessed Dumbo would instill some sort of fear in my 4 year old. . . .can you blame him. . . .clowns are mean to elephants. :)

My Many Coloured Days said...

Okay, this is weird, but another one of my friends posted a clown picture from her son's preschool the other day too! She's under WurtzClan on my links - do you guys know each other, or is this just a weird coincidence?!

What a small world. . .I just glanced real quick and the your friends teacher is in the classroom next to Max. So funny!

Clowns at school huh? I grew up with angry nuns, so clowns sound a lot more fun. Good choice!
Those little boys grow up fast. I love what you are doing with the blog. What an awesome way to keep a record. Keep it up and post post post. :)