All Kids go to Heaven

I'm pretty sure all my children died and went to Heaven. At least a really great visit to DisneyLand in the Water. We found a little indoor water park in Lehi, Utah called Legacy. You could tell by the squeal in their voice, the twinkle in their little eyes and the permanent grin plastered on their faces that there was no other place that they would rather be. Pretty sure in their little child world that it looked like Heaven on earth. 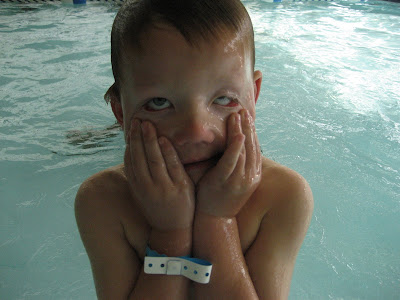 I like to call Max "The Rat." He really is quite the water rat. I'm sure he would have stayed and played all day if I would have let him. I had to keep a close eye on MJ. He thinks that he is a little more advanced in the pool than he really is. Every time I turned around he was face down sometimes gasping for air and other times actually swimming. My job as the mom was to predict accurately whether he was drowning or not. More than once I guessed wrong and he barked out that he was "Swimming." 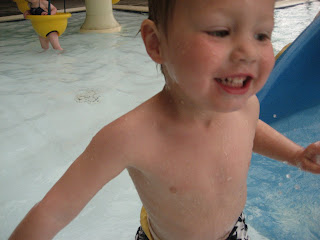 I'm pretty sure that Alexander Eat, Sleeps, and Dreams "Wa~Wa." Our little guy of few words woke up this morning and said,"Waterpark!" Meaning he was ready to go back to the waterpark. If he had his choice he would live in the water. He is definitely our little fish. I'm going to see if we can get him in swim lessons this summer. His dreams would come true. . . .swimming in the pool is about all his little mind a can fatham right now. 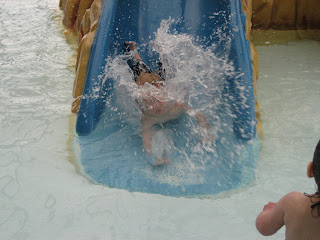 I thought Barrett Boy was never going to warm up to the water. Typically our Bathing beauty huddles around the steps. Yesterday he sure came alive. He couldn't stand under enough water spouts or go down enough slides. Not only was he going down slides unprompted and by himself, but he was going head first. :) I guess Bathing Beauty decided to get out from under the umbrella and play for awhile. 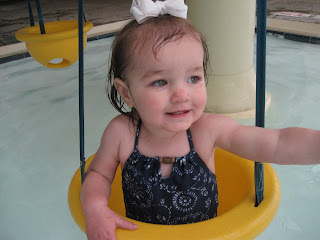 Jacqualynn Grace is never too far behind her brothers. She may be our fairy princess, but she can sure hold her own. She loved bouncing in the swings, chasing after her brothers and being spoiled by her Aunt Lyss. By the end of our little adventure she was a true prune, but she managed to smile from cheek to cheek and even kept the bow in her hair. I'd have to say that she is our rugged Princess and we kind of like her that way. ;)

All I have to say is Thank Goodness for McDonald's. Once the children were raisins and disrupting the 'Adult only' hot tub I bribed the them to leave their heaven on earth with a Happy Meal at McDonald's. They knew they were in Heaven because they never get a happy meal. ;) Aunt Lyss and the boys had a competition to see who could eat their food the fastest. I had to chuckle when Aunt Lyss shoved the last bite of food in her mouth claiming her victory and Max Said, "No Aunt Lyss, you have to 'chew chew swallow.'" Maybe we didn't have Mickey or Minny but we had Aunt Lyss and Ma Deb and the children couldn't have been happier. It was a great outing and by far the best $25 I spent in a long time. Disneyland can wait yet another year. We found the Watson's Happiest Place on earth. I guess maybe it isn't the big round ears as much as it is the people that make a place special.

Fun Stuff! I wish we had something like that here! I would live there!

That was definately fun. As for me losing the eating contest, I think one of Max's most recent phrases comes to mind, "I don't know what you are talking about".

she will need to be dried off after she swims, I will gladly take her to the change room and get her naked take her in the shower and lick her pussy clean,she should be the right height to put her little mouth to good use,then dry her off paying EXTRA attention to her pussy